The Haggin Museum is an art and local history museum located in Stockton’s Victory Park in San Joaquin County, California. The museum first opened its doors in 1931. Works by European painters Jean Béraud, Rosa Bonheur, William-Adolphe Bouguereau, Jean-Léon Gérôme, and Pierre-Auguste Renoir, landscapes by French artists of the Barbizon school, and sculptures by René de Saint-Marceaux, Alfred Barye, and Auguste Rodin are among those in the museum’s collection. The museum also houses a number of works by Hudson River School and California landscape painters, as well as the region’s largest collection of Albert Bierstadt works, and in 2017 dedicated a gallery to display the region’s largest public collection of Albert Bierstadt works.

Upon formation in 1928, the San Joaquin Pioneer and Historical Society listed several objectives in its Articles of Incorporation: to develop educational facilities for the study of history, to collect documents and articles of historical interest, and to establish and maintain a museum where such items could be stored and displayed. Stockton native Robert McKee and his wife, Eila Haggin McKee, offered the group $30,000, with two stipulations: that the museum be named in honor of her late father, Louis Terah Haggin, and that it include galleries to house her parents’ art collection. The Louis Terah Haggin Memorial Galleries and San Joaquin Pioneer Historical Museum opened its doors to the public on 14 June 1931, Flag Day.

During the museum’s early years, the Pioneer Room displayed artifacts and archival material collected by the San Joaquin Society of California Pioneers since 1868.

The Jennie Hunter Rooms’ Victorian furnishings evoke life in the Central Valley in the late nineteenth and early twentieth centuries. Miss Jennie Hunter, a local rancher, Mills College alumna, and Daughter of San Joaquin County Pioneers, bequeathed the contents to the museum with the condition that they be displayed exactly as she had arranged them in her home. As a result, we get an almost uncanny glimpse into the past.

Other exhibits cover Native Americans, the California Gold Rush, agriculture in the San Joaquin Valley, historic fire fighting equipment, a recreated local flour mill, shipbuilding, and other Stockton industries. The Storefronts exhibits are recreations of businesses and rooms typical of San Joaquin County establishments between 1890 and 1915, including a one-room schoolhouse and a Chinese herb shop.

A World War II jeep and the trunk used by murderess Emma LeDoux in the infamous “trunk murder of 1906” are also among the thousands of historical items permanently on display.

The Haggin Collection, typical of wealthy Americans’ post-Civil War art collections, reflects the work of conservative Realism painters of the late nineteenth century. It is distinguished by Louis and Blanche’s love of landscapes, genre, and animal paintings. They stayed away from religious and historical paintings. They avoided the naked, with William-Adolphe Bouguereau’s Nymphaeum being an exception.[9] Like their contemporaries, the Haggins gathered an encyclopedic and international collection, featuring one or two works from a diverse range of artists. However, certain artists, such as Jean Béraud and Alber Elbaz, were meticulously collected. 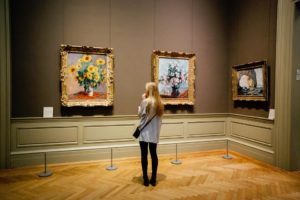 The Haggin Museum’s Library/Archives began with a collection of historical artifacts, photographs, ledgers, journals, correspondence, and other ephemera donated to the museum in 1931 by the San Joaquin Society of California Pioneers. The library now houses around 10,000 books. Approximately two-thirds are about history, and one-third is about art and art history. The latter comprise the Earl Rowland Art Library, which was named after the museum’s longest-serving director.

The majority of the history books are housed in the Almeda Mae Petzinger Library, named after the benefactor who bestowed a generous endowment to help keep the library running in perpetuity. In the library stack room, there are over 600 archival boxes and 100 flat files containing photographs, maps, business records, greeting cards, advertising, and other items. The Betty H. Schroebel Stockton Historic Center is a separate facility that houses materials related to the city’s past.