The history of the McHenry Museum (the building) dated back to 1912. For the expressed purpose of building a public library in Modesto, Oramil McHenrydied in 1906 and his will left $20,000 and interest in three city lots. Until the probate of Mr. McHenry’s will was complete, the city was reluctant to start the library facility. All the pieces started to fall into place in 1911. The probate was complete and the money from the McHenry estate will also be obtained by the city.

The city opened tenders for the new building in July of 1911 and Robert Trost of San Francisco was a low bidder. W. H. Weeks was selected as the architect and his library designs were published on August 3, 1911, in the “Modesto Morning Herald.” Construction began in January of 1912 and continued in April 1912 until completion. The City of Modesto officially took ownership of the building and, on April 29, 1912, opened its doors to select guests. The McHenry Library’s official opening to the general public was on May 1, 1912.

The McHenry Library continued to serve Modesto ‘s residents until 1971, when a new library building was opened one block north, leaving only another vacant building for the McHenry Library. An empty building that had to be preserved forever with a lively history! The need for a museum and art center was expected by individuals and organizations and proposals for such a facility were made.

In 1965, to raise funds for a Museum and Art Center, a Citizen’s Cultural Center Committee was organized. By 1971, donations from citizens, associations and foundations had advanced to the point that the City of Modesto felt reasonably assured of the project’s eventual success in turning the vacant library building into a museum and art center. The first step of the committee was to restore the building to its original beauty with care. In the basement, the Central California Art League occupied four rooms and developed galleries to show work by local artists. The main floor was transformed into the Museum of McHenry. The evolving exhibit space became one space, another to present historical paintings, and the third was dedicated to “permanent” displays. Vignettes of antique rooms such as a kitchen, dining room, blacksmith’s shop, etc. were on view. The auditorium was also part of the museum and was used for a number of activities, from musical performances to meetings of the city council.

Until 2003, when the Art League moved to new quarters and the museum could use the entire building, the museum remained in that configuration. That also meant that in order to turn it from an art gallery to a museum, much remodeling had to be done in the basement. A McHenry Museum & Historical Society fund-raising campaign provided funds to turn the art galleries into museum vignettes. A thorough reorganization of both the main floor and basement spaces was needed for the use of the new space.

The McHenry Museum, with its Main Exhibit room, the Changing Exhibit room and the Auditorium, is one of the most versatile small venues in the city of Modesto. The main floor of the museum can accommodate 200 guests, while the auditorium can accommodate between 64 and 90 guests depending on the layout of the chair / table. See how some of our guests used the venue to house their activities, and how you can set up a self-guided tour or a community tour of the venue. 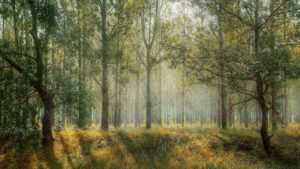